Bike of the Month: De Dion-Bouton Tricycle from 1899

The De-Dion-Bouton motor tricycle was the most successful motor vehicle in Europe from 1895 to the turn of the century.
With around 15,000 units sold in the period from 1897 to 1901 alone, it achieved the first breakthrough in the spread of motor vehicles. The high-speed De-Dion-Bouton engine set new standards for built-in engines and is considered the forerunner of all motorcycle engines.

Prior to this, steam engines for four- and three-wheeled vehicles had already been produced from 1883, developed by the railroad engineer Charles-Armand Trépardoux and the mechanic and boilermaker Georges-Thadée Bouton on behalf of Count Albert Jules De Dion.

After seeing Gottlieb Daimler's gasoline engines at the Paris World's Fair in 1889, De Dion and Bouton decided to develop gasoline engines.
Between 1890 and 1893, Count de Dion had already employed an engineer named Delalande in a workshop outside the company for designs and preliminary work for an internal combustion engine, but it was ultimately Bouton, not Delalande, who made it functional and developed it to production readiness.
Trépardoux, who wanted to stick to the further development of steam engines, left the company in a dispute in 1893, having previously completed the basic work for a rear axle, which was patented by the company in conformity with his employment contract and was widely used for decades as the De-Dion axle.

In 1895, the first Tricycle with this engine went on sale. The heart of the motorized tricycle developed by De Dion Bouton was a frame originally designed for pedal-powered machines.
The first machines had the so-called "gooseneck" frame, which was based on the pedal-powered tricycles produced in the early 1890s by Humber, Rudge, Quadrant, and others.
The arrangement of the engine, ignition system, fuel storage and battery can be traced entirely to De Dion Bouton.
The tricycle with a track width of 90 to 92 cm was chosen because for De Dion and Bouton "a bicycle seemed too unstable for this purpose". Drive was via a pair of gears from the engine directly to the rear axle, and a differential compensated for the different curve radii. Both - the engine and the differential sat on the rear axle.
The achievable speeds were thus 35 km/h with the first reduction, 30 km/h with the second and 25 km/h with the hill reduction.
The tank capacity was 3 liters for a range of 70 km.
At the end of the 1890s, these motor tricycles were considered the fastest motorized means of transportation. 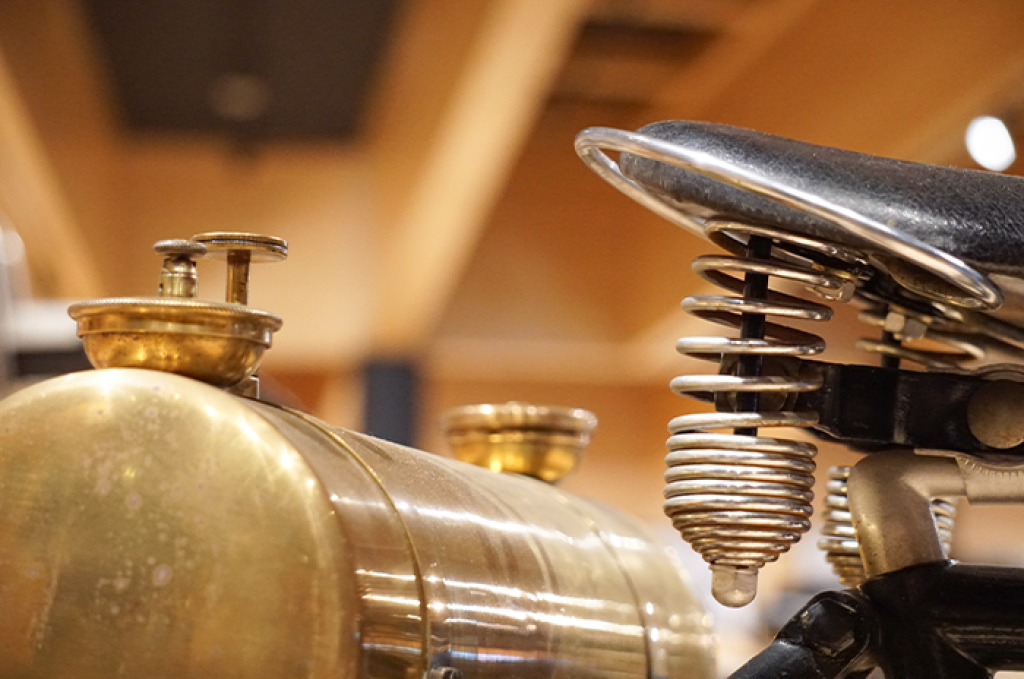 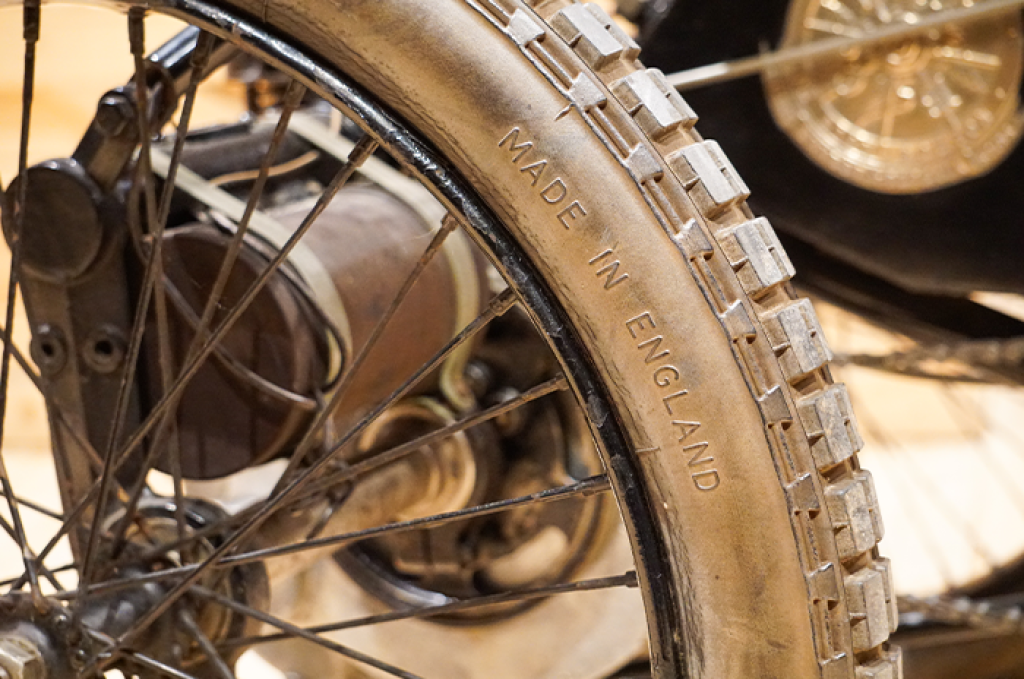 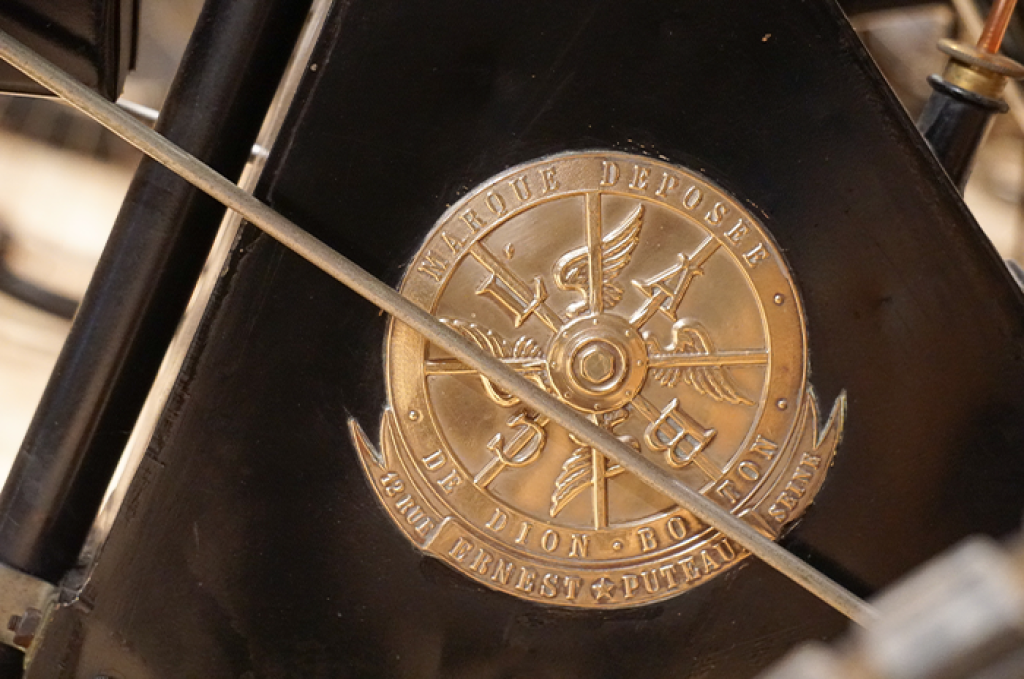 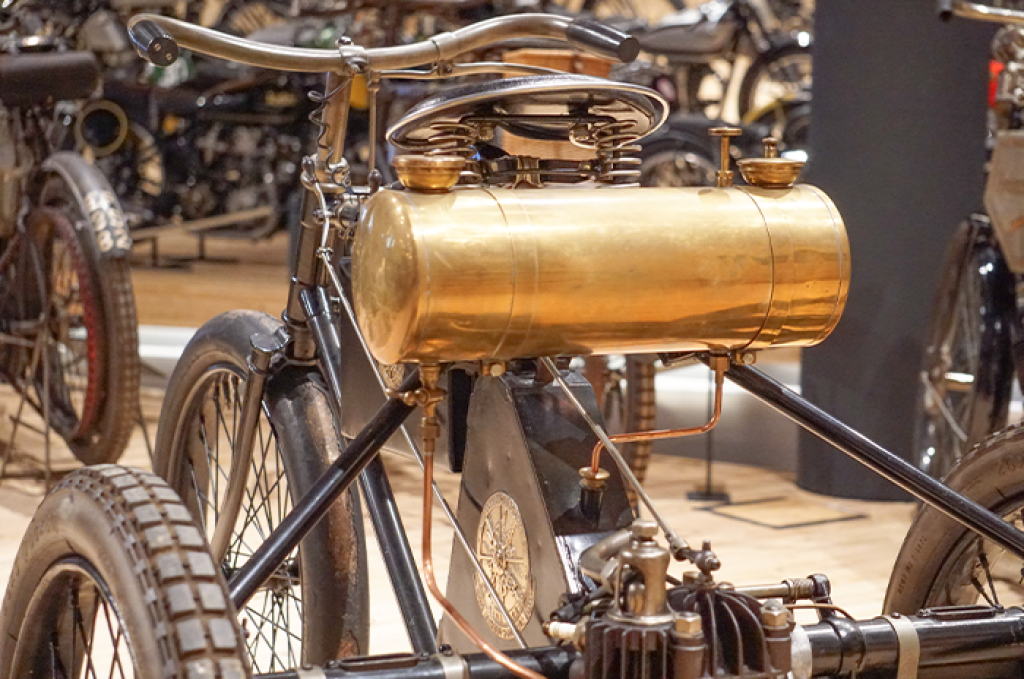 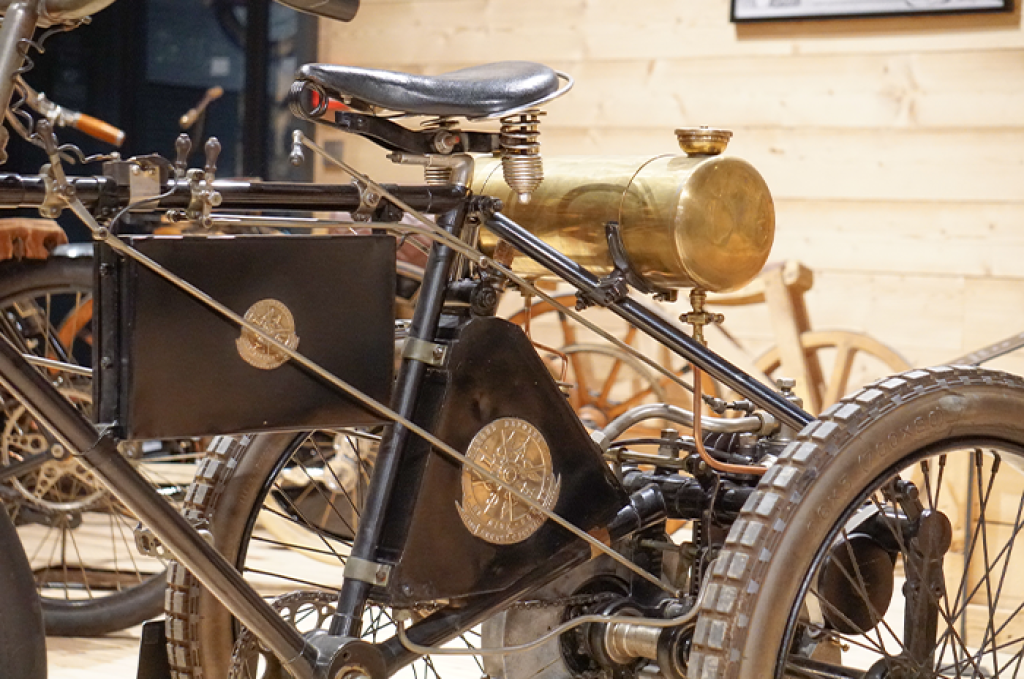 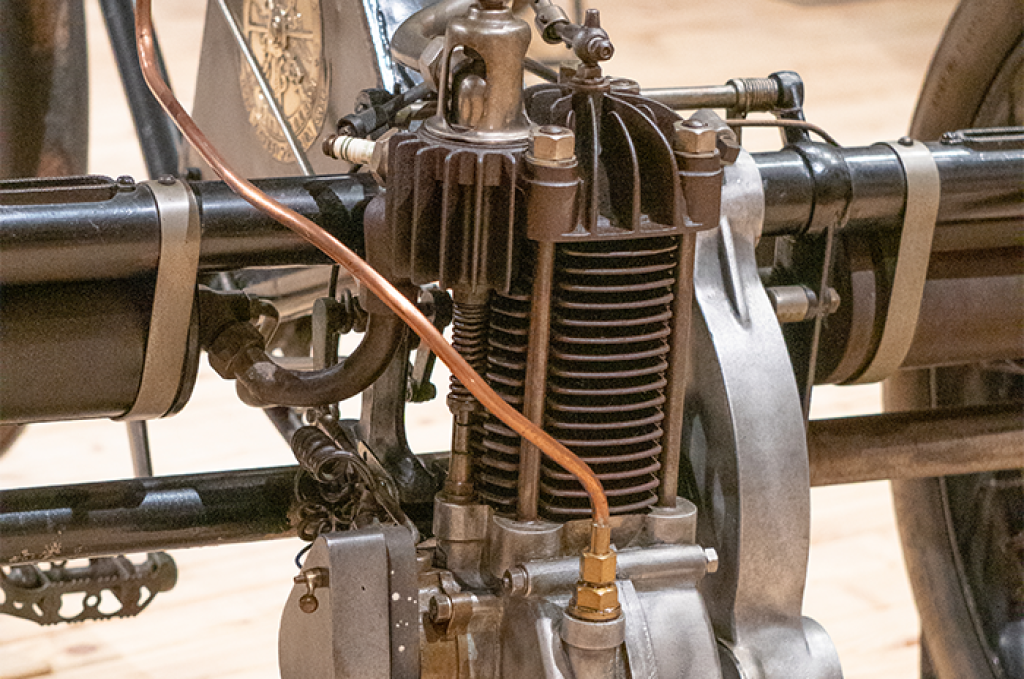 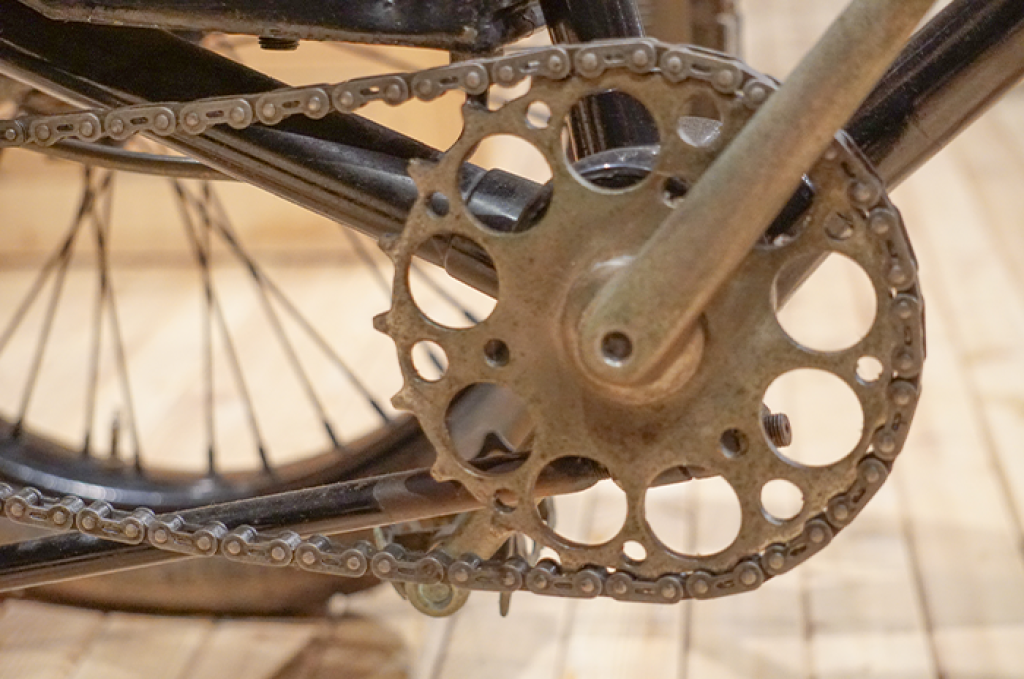 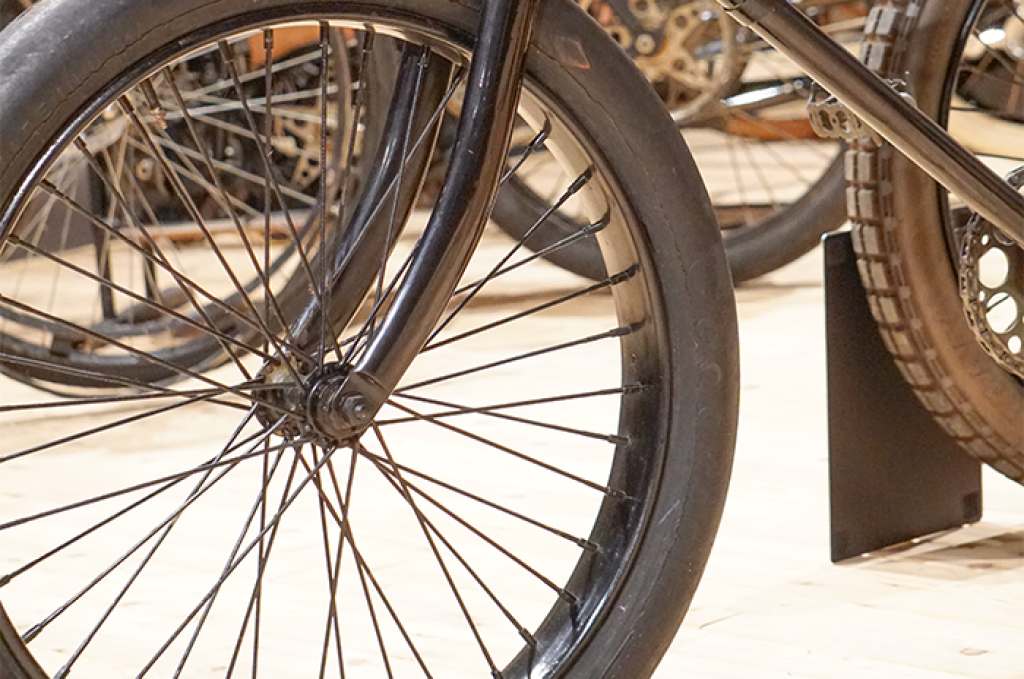