Another highlight at our Top Mountain Crosspoint museum!

Were very pleased to present you with this loan from mercedes benz a true to original replica widely regarded as the worlds first automobile. The original example built in 1886 can be visited in the Verkehrszentrum of the Deutsches Museum in Munich.

The one cylinder four-stroke engine with  produced 2/3 horsepower ( 551 kW ) at 400 rpm. A few details still can be found on modern vehicles for example the crankshaft with counterbalance, the electric ignition and the water cooling system.

It weighed about 110 kg (about 220 Ib) that was an extremely light engine for the time. The engine wasn’t fuelled with what we today call petrol it needed a light petrol called ligroin witch you could buy at a chemists shop.

Due to reasons of secrecy the first test driving took place in 1885 at the courtyard of the fabric.

The first outside driving was held at night and took only a few minutes because after about 100 meters the vehicle stopped. After a view upgrades witch improved the operating distance the vessel got his patent on the 29 of January in 1886.

The first official and even documented driving of the automobile took place on the 3rd of July in 1886 at the Ringstraße in Mannheim. Benz`s son Eugen ran alongside the vessel with a bottle of petrol in case the fuel tank got empty. 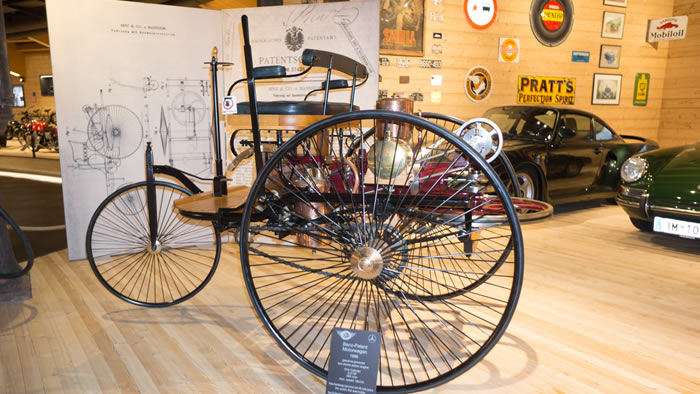